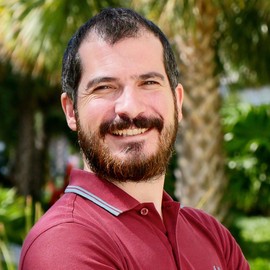 I am a Catalan microbial ecologist and Group Leader at the Institute of Evolutionary Biology (UPF-CSIC) in Barcelona. I completed my bachelor’s and my Ph.D. in Environmental Microbiology and Biotechnology at the Institute of Marine Science - CSIC (Barcelona), followed by postdoctoral research at the University of Barcelona, the University of British Columbia (Vancouver), and back to the Institute of Marine Science. In February 2019 I joined as Assistant Professor the Rosenstiel School of Marine and Atmospheric Science at the University of Miami and in February 2021 I joined the Institute for Evolutionary Biology. My research has focused on the study of the ecology and evolution of microbial eukaryotes but recently, I have expanded my scope to the prokaryotes in order to have an integrated view of the microbiome. I am currently investigating microbial community ecology in marine animal-associated environments using cutting-edge sequencing technologies and computational biology. I hope that my research can help to have a better understanding of the role that microorganisms play in the response of animals to climate change.